The UWI’s first modern hall of residence was named after the university’s godfather – Sir James Irvine, Vice Chancellor and Principal of the University of St Andrews in Scotland from 1920 to 1952; and the chair of the British committee on higher education that recommended establishment of the regional university.

Sir James died in 1952, just four years after the then University College of the West Indies (UCWI) matriculated its first class, and two years after Irvine Hall opened in 1950.

Long a co-educational hall, Irvine was once a residence for the UCWI’s female students only. These young women, like their male counterparts, had first lived in wooden barracks buildings left over from World War 2, when the first cohort arrived in 1948. These temporary halls of residence were known as Gibraltar Hall. The women were moved over to modern facilities as soon as the first blocks were available. The men would later be shifted to Chancellor Hall.

Crockery used in the various halls of residence when the university was completely residential.; from the UWI Museum collection

An Irvine Hall exhibit during hall celebrations put together by then Hall Committee Secretary Jardines Spaulding. 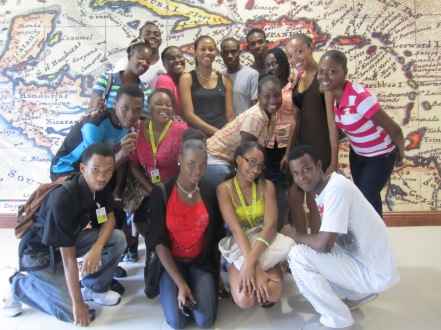 Irvine Hall students visiting the museum in 2012 would be graduating this year. They were especially interested in old hall memorabilia.

Sir James Irvine and daughter during a visit to the then University College of the West Indies (UCWI). Detail from a photo in the UWI Mona Main Library Historical Photo collection.

Like the other early halls on the founding Mona campus (Taylor, opened in 1952 and named for first Principal Dr Thomas Taylor; Chancellor, opened in 1953, named to honour the university’s first Chancellor Princess Alice, Countess of Athlone; and Mary Seacole Hall opened in 1958 and named for a famous 19th century doctress), Irvine was designed by British modernist architectural firm Norman & Dawbarn. The residential blocks were spaced to allow the infilling of additional units as the student population rose and Irvine Hall is also unique in its physical layout as it is the only hall with a ‘spine’ running its full length to which all residential blocks are connected. The ‘SPINE’, Irvine students describe the spine as the centre of hall activity.