CLUES TO THE FILM

A 1953 film on the University College of the West Indies (UCWI), precursor to the present-day University of the West Indies (UWI) is the centre of a current UWI Museum exhibition, Freeze Frame & Annotate! And various alumni have answered our call for information. Many of our ‘freeze frames’ are annotated with names and nationalities, even nicknames, hall allegiances, and character readings!

A couple of alums have gone further, giving us insights into how the film was made and how it came back from a long hiatus in the unknown!

Made as a promotional piece, the film was used until it started deteriorating, and then was seemingly forgotten. Jamaican scientist Professor Ken Magnus remembers getting a digital copy from Trinidadian alum Dr Premchand Ratan.…and Dr Ratan says that the credit really belongs to Mr Esmond Ramesar, veteran Resident Tutor of the Extra-Mural department in Trinidad, who – while working at the Mona Campus in Jamaica – found the film reel in a discard pile and rescued it. We at the museum got it from UWI Professor of Chemistry Robert Lancashire, who worked with Prof Magnus on a history of UWI’s Department of Chemistry. 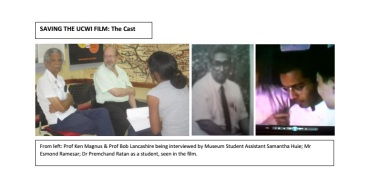 The other gem of information came from Mr Roy Bailey, one of the UCWI’s first set of graduates in February 1953, and the first person to receive a UCWI certificate. Mr Bailey, a Natural Science graduate, was first in line, alphabetically. The medical students, who were the pioneer class at the UCWI in 1948, had a longer programme and hence none of them would graduate for two more years.

Mr Bailey recalls that he knew the film’s producer, Mr Martin Rennalls of the Jamaica Film Unit, which was originally located on the UWI campus. He says that the team only had enough film to shoot one student going up to receive the degree. Fortuitously, he was the first and he is the person seen in the film.

Mr Bailey remembers being an ‘extra’ in a shorter segment shot by the Film Unit , but which did not end up in the longer film. That segment was designed to show students arriving from the Eastern Caribbean by plane. Students from all over the Caribbean converged on Jamaica in the 1940s, 50s and 60s, to attend the regional university. The extension of the university to campuses in the south-eastern islands of Trinidad and Barbados took place in the 1960s.

The exhibition comes down in mid-April, but we are trying to figure an effective way to send elements of it around cyberspace to UCWI alums who might like to join in contributing their recollections.