If you’ve had a chance to visit the historic UWI Chapel, you may have focused on the stained glass window with its saints whose names have been adopted for parishes across the region; on the arms & ancient seals of original members of the university, set into the coffered ceiling; on the stone slabs tiling the floor or the cut limestone blocks of the walls. Another thing that stands out is all the wooden elements, including stair treads and columns famously made from hardwoods logged in the then British Central and South American colonies of British Honduras, now Belize and British Guiana, now Guyana.

There is another story about the Chapel woodwork that we stumbled on recently – it relates to the window and door frames, the altar rails and other elements of the structure that was rebuilt at the UWI Mona campus in the late 1950s and dedicated in 1960. The old sugar estate rum storehouse, dated 1799, had been dismantled and stones moved from Gale Valley Estate in the parish of Trelawny, across the mountains to Mona, where it was gradually reborn as a non-denominational chapel. 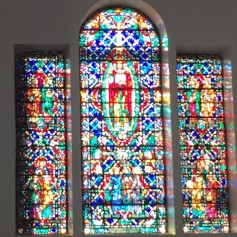 Report on the dedication of the UWI Chapel, Feb 1960, in The Pelican student publication

An attendee at a recent talk on the Chapel, in London, by British historian Duncan Sutherland, volunteered that her father, Maurice Lister, did the woodwork. She referred us to her brother, who kindly dug into his father’s notes on the job, for which the General Contractor was A.D.Scott and the Architect was the firm of Norman & Dawbarn which had designed the early university:

The notes stated: “The first item in our contract was to make and fit all the mahogany window frames and sash windows. This was a painstaking job in itself as every stone opening in the re-erected building was just slightly different in size. Plywood patterns had to be made of each opening and the frames and windows built to match.” Lister’s son Michael, who worked in the business, recalled that the windows were a priority so that the building could be closed up and secured; while other elements of the job were prepared and stored in the Lister workshop. These, to quote the brief notes left by Lister Sr, included the large mahogany paneled doors, and interior furnishings: “the altar rail, paneling, pulpit and pews. Each side of the altar rail was topped by a single length of solid mahogany.”

Michael noted that it was a busy time for the business, including other work for the nascent university, and that the Chapel work took up much of the latter part of 1959, to meet the February 1950 Dedication deadline.

A book on the Chapel Gifts by Rodina Reid also notes that Mr G.S.M. Lister Esq made the altar, the platform, the pulpit and its canopy, the altar rail and ceremonial chair at a cost of £4,101 sterling; as well as the mahogany pews.

Details are precious! Thanks to the Listers for those they provided. If you have, or know anyone with photos showing the Chapel being rebuilt at Mona, or any first-hand or written accounts of its relocation from Trelawny, please share them with us at <uwi.museum@uwimona.edu.jm>