COMBATING THE LOSS OF CULTURAL PROPERTY – A New Push

What is it that helps ground us in our cultures? Any answer would include histories, stories told across generations, natural specimens, and artifacts – meaningful works shaped by people – that we can relate to with a sense of belonging, wonder or curiosity. Yet the illicit traffic in historic cultural property is leaching that away and it has become a matter of serious concern in the Caribbean as in many other areas with far higher profiles.

How much so? Anecdotally, the number of stories of thefts of old furniture, cannons and coppers, artworks and archaeologically significant artifacts, as well as significant species, has ballooned; stolen or looted items feeding a local, but moreso international, collectors’ market as well as the undiscriminating scrap metal trade. Internationally, it is a multi-billion dollar industry, facilitated by online markets and contacts. Officials note that the Caribbean has become an origin, a destination and a transhipment point, and there is a push, in Jamaica, to strengthen relevant local laws as well as to move to sign and ratify relevant international conventions, specifically the 1970 UNESCO Convention on the Means of Prohibiting and Preventing the Illicit Import, Export and Transfer of Ownership of Cultural Property and the complementary 1995 UNIDROIT Convention on Stolen or Illegally Exported Cultural Objects.
Jamaica’s Minister of Culture, Gender, Entertainment & Sport, Olivia Grange committed to addressing the issues through revision of the Jamaica National Heritage Trust (JNHT) Act as well as spearheading moves to have Jamaica become party to the conventions. As an illustration of the problem, she noted that recent significant finds at the iconic White Marl Taino site near the Jamaican capital had been kept quiet due to a concern for protection of the site from looters. She also raised questions of repatriation of cultural property taken off the island in the past. 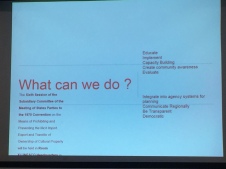 Kevin Farmer slide addresses what can be don

The shortcomings as well as the benefits of the conventions, the scale of the problem, and the need to get a broad range of stakeholders on board, were highlighted at a workshop meant to kick start the process, which will require the improvement in national legislation and services, including the creation of national inventories. However, even in the current context, law officials recognised existing local legislation which could be brought to bear in some instances of illicit activity related to cultural property and pledged to use these means within a collaborative context. They also noted the need to address both the push and pull factors leading to trafficking in cultural property: on the one hand unemployment, poverty, weak laws and a lack of awareness and appreciation regarding cultural objects; on the other, the existence of voracious foreign markets, the existence of international trafficking networks and legal loopholes.

JNHT curators and archaeologists showed images of undocumented artifacts piled high by collectors without any curation, of rock art surgically cut away from original locations, or sites looted of objects and also of historical context – cultural property harvested to feed the appetite of collectors. The need for public education but also the responsibility of museums and collectors to ensure clear provenances for acquired objects, were both underscored.

At present, there are 136 state parties to the 1970 UNESCO Convention, including the Caribbean nations of The Bahamas, Barbados, Belize, Cuba, the Dominican Republic, Grenada and Haiti. Jamaica is not yet a signatory though it has signed the convention on underwater cultural heritage. No Caribbean country has yet signed the 1995 UNIDROIT Convention which strengthens the provisions of the earlier convention.

Curators and Directors of museums, heritage and cultural agencies, government and law officials and officials related to customs and trade joined the Ministry and UNESCO for the workshop, which included a broader Caribbean, as well as a Jamaican, perspective. Other workshops are planned.