Some of our best stories are sparked by visitors coming face by face with an artifact: a letter of admission for a pioneering student; a vase presented to the chapel, a bust of a university founder…

Sometimes we’re able to catch the moment or the story on video or audio or photo. Sometimes all we have is the memory of a memory.

Gloria Barrett-Sobers was University Registrar at the University of the West Indies from 1992-2007, the first woman to climb to the top of that particular ladder. She visited the museum with two friends, Janice Slyfield Thompson and Merle Wade and while walking around, saw a letter of admission sent in 1948 to Owen Minott, one of the pioneering class of students of the then University College of the West Indies (UCWI). Bam! – it brought to mind the happiest letter she ever had to respond to as UR: from a man trying to recall details of the day he proposed to his then girlfriend who became his wife of 50 years!

Janice Slyfield who came in with Mrs Barrett-Sobers, was immediately drawn to a painting of a demonstration held by women of the Mary Seacole Hall. Why? She was there!

Hearing others who were at the Seacole demonstration 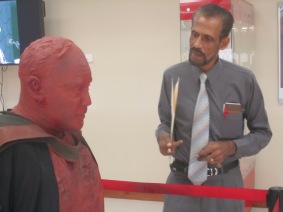 Tony Patel, a photographer and media professional, came to an exhibition and  saw a bust of one of the university’s founders, Sir Philip Sherlock – and remembered coming upon it out amid the debris of Hurricane Gilbert at the university’s Mona campus in Jamaica in 1988. That might be how the bust, an unsigned work traced to Jamaican artist Carl Abrahams with the assistance of sculptor Fitz Harrack, damaged it’s nose.

One more, recalling childhood: A young woman came in – a student at the Mona campus. She was watching a film dating back to 1952/1953 when she suddenly exclaimed! It turned out that she had seen her granduncle, then himself a student, playing in a student band on the film.