Here is a story that only a few people know:

…That iconic mural that fills one wall in the Dining Room of the Mary Seacole Hall at the UWI Mona; the one with dancers twirling across the lawns…is something in which I’m proud to have played a lasting role.

The iconic Prof John Waterlow, father of the Tropical Metabolism Unit (now the Caribbean Institute for Health Research) was living at the then University College of the West Indies, UCWI Mona campus faculty housing, College Common, with his wife and artist Angela and family. In Fall 1958, I was contacted by Angela Waterlow to collaborate on a project she had in mind – a mural for the Dining Room of the new women’s hall named in honour of Jamaican ‘doctress’ Mary Seacole. 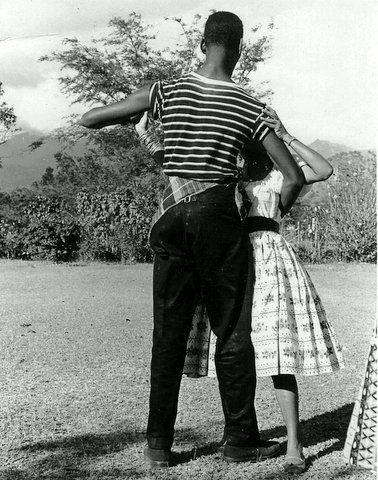 Seacole Dining Hall with mural in the background

Mural behind ladies of Seacole Hall at formal dinner, in white dresses and red academic gowns

At the time I was studying Natural Sciences and leading the Dancing & Gymnastics Group. Weekly classes were held in the Dramatic Theatre or in the Union (Dance techniques, West Indian folk, Cuban, Latin & Popular).

She wanted me to model for the mural she had in mind, which was planned to show dancing male and female figures in abstract form, projecting constant movement..multi-directional…strength, joy, happiness, but with a relaxed feel. As it turned out, there were two or three couples invited to dance, on separate occasions, so that our movements could be captured.

So Mrs Waterlow said, “bring your dancing partner, and music – mento and ska – to our home in College Common, and dance.”  So, we dug up some costumes and danced to ska and mento on and off in a relaxed fashion, showing a variety of moods, styles and pace, while Dr Waterlow, himself, filmed with a movie camera and a 35mm SLR camera, for about 25 minutes. Angela stood nearby, directing changes as she saw appropriate.

In short, images of the dancers were caught in motion and also in reflex.

The artist selected from those images and placed them on a board cut to the scale of the the dimensions of the actual wall – all male and female forms in charcoal or pencil, of the dancing figures in abstract. Some time later, she brought this to Chancellor Hall for me to see. And, about a month later, she brought the scaled palettes with all figures – the scaled down mural all in the detailed colours; the way the finished mural would look in Mary Seacole Hall.

It was later completed in MSH as planned….I can still see my young, joyous self reflected in several of the male figures dancing across the wall of the Mary Seacole Hall dining room and I am proud to have been a part of it’s history.