Pete the Pelican has become an unofficial symbol of the UWI and the label ‘Pelicans’ has started to attach to a lot of teams at the university. But the first promotional use of the university’s crest seems to date back to February 1951, when the students of the then University College of the West Indies (UCWI) attached the name to their new student publication. 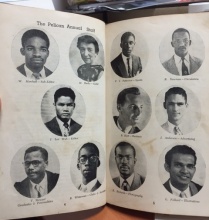 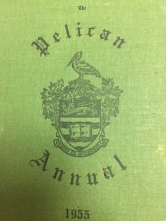 This would have been just a year or two after the UCWI was granted a Coat of Arms by the College of Heralds in the United Kingdom – the crest of which was a pelican. The college Council had chosen this bird for its nurturing reputation and also because it was common throughout the region that the new university was committed to serving.

In a letter to designer H. Ellis Tomlinson on 15 Jan, 1949, Principal Dr Thomas Taylor noted: “As a crest, the Council is unanimously in favour of the pelican…”

On a trip to London in February 1949, Dr Taylor brought, for Tomlinson, a good photograph of the brown pelican of the Caribbean in heraldic pose, noting, “It is a striking object with a white head and streak down the neck…” Although the UCWI authorities were clear that they wanted the brown Caribbean pelican, pelecanus occidentalis, the grant from the College of Heralds simply refers to a ‘pelican proper’ which allows the use of any natural pelican as against the mythical pelican, cutting its chest to draw blood for its young, which some universities have on their arms.

The UCWI students started their Pelican newsletter in 1951. In 1955, they added an annual journal which included reports on campus programmes, activities and personalities, and photographs of graduates. Together, the publications provide a detailed record of academic, extra-curricular and social developments for the early years of the university.