We’re marking our calendar for the rest of 2015 and we’d like to bring you up to date on what we have planned.
So to begin with:  if you haven’t come in to view our summer cameo focus on the work of the University Archives, you have just a few days left to do so. ‘Keeping the Record Straight’ comes down at the end of September to make way for a cameo exhibition on UWI’s academic dress that will run through October.

October is graduation month at the University of the West Indies, whose four campuses span the length and breadth of the Caribbean Sea and even beyond. This year, graduation for students of the Open Campus will take place in the island nation of Antigua/Barbuda on Saturday October 10. The following weekend will find the UWI Chancellor and other senior academics leading the ceremonies at the Cave Hill Campus in Barbados; then on the following weekend to the St Augustine Campus in Trinidad & Tobago; and north to the Mona Campus in Jamaica for graduation ceremonies on the last weekend of October. 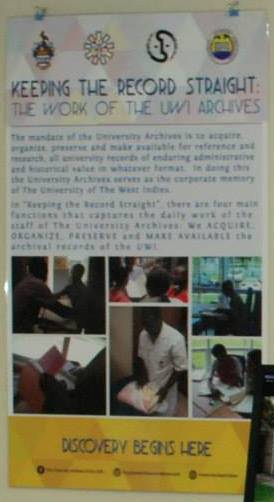 Graduation is the major annual occasion when academics and students are robed and participate in processions that reflect faculty, academic level and university hierarchy. Our ‘Great Day for All’ cameo exhibition will focus on the roots of the UWI’s academic dress traditions.

Then in November we will kick off an occasional focus on UWI & the 1960s, developed with the Social History Project (SHP) of the UWI Department of History & Archaeology and with help from our colleagues at the University Archives. On November 6 at 3pm we plan to host a panel presentation on UWI’s MLK Moment. Recent Nobel Prizewinner Rev Dr Martin Luther King was the preacher at a June 1965 Valedictory Service for UWI’s first batch of graduates following the end of the university’s special relationship with the University of London, which had previously joined in assessing graduates. We’re planning a pop-up exhibition on the MLK Moment, so those who might have mementoes, including photographs, please get in touch!

Before year-end we will also re-mount our LEWIS 100 nod to the 2015-2016 centenary of Sir Arthur Lewis, Nobel Prize winner for development economics and the first West Indian Principal of the UCWI in 1959/60 and first Vice Chancellor of the independent UWI in 1962. Lewis was yet another important figure of the 1950s and 60s who had a strong UWI connection.

Pass the word along and stay in touch with us as we explore and expose aspects of the UWI’s history and development.